The Figure As Vehicle in the News

The Figure As Vehicle at the Mount Dora Center for the Arts has been the subject of two positive media articles in the first two weeks of the show. 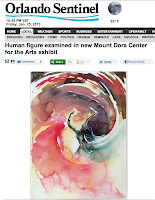 Christine Cole of the Orlando Sentinel interviewed the artists during the gallery setup day and provided a comprehensive pre-show summary on January 11, 2013. Click here to read the article.

M.W. Kimmel of OrlandoArtReview.com, a blog which reviews and raises awareness of the visual arts in Central Florida, attended the opening reception and posted a wonderful review of what he saw on January 25, 2013.  Click here to read his impressions of the show.

There is also a wonderful full-page article that appeared in print (we're tracking down where it came from) that we found online. It has several great photos from the opening reception. Click here to open the story as an easy-to-read PDF (it will take a few seconds to load).

You can keep up with all of our media mentions by checking for updates to our Press page of the site. Included there is full-page review of the 2010 version of the show in the Valdosta Daily Times.
Posted by The Figure As Vehicle at 8:18 PM 1 comment: 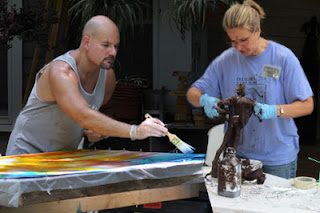 John Carollo and Marsha De Broske try to integrate free educational demonstrations of their distinctive techniques into their gallery events when possible, and are pleased to be presenting the first of two such events during the Mount Dora Center for the Arts exhibition on Thursday, January 24, 2013, from 6-8 PM.

This is a great opportunity for members of the public to interact with both artists, learn more about how they work and what inspires them, and enjoy a lively discussion about what they do, their collaboration and specific pieces in the show.

Marsha will demonstrate her innovative use of PowerTex fabric hardener from 6-7 PM, showing how she sculpts a figure from the surprising starting material of wire and cotton strips. Here's a brief glimpse of her at work during a previous event:

John will explain his unusual Controlled Chaos painting technique with watercolor on paper from 7-8 PM, providing examples of his creation of atmospheric and glowing light effects.  Here is how he created one of the pieces currently in the show, No Exit:

There will be a second round of demos on Thursday, February 21, 2013, where John will show how he transferred his painting technique from paper to silk, used to create three large pieces in the show from 6-7 PM and Marsha will continue her work with PowerTex from 7-8 PM.

Posted by The Figure As Vehicle at 10:09 AM No comments: 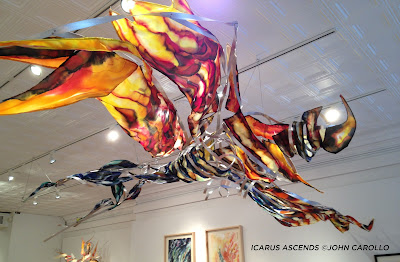 One of the more surprising elements of The Figure As Vehicle at the Mount Dora Center for the Arts is overhead - Icarus Ascends, a dramatic aluminum, stainless steel and painted silk sculpture flying above the other artwork. Here is a bit of the story behind its creation.

Watermedia artist John Carollo has long had the goal of combining his distinctive painting style with kinetic sculpture to create large-scale pieces for atriums, hospitals, public spaces, transit stations and the like. With the premiere of Icarus Ascends at the Mount Dora Center for the Arts, he has now completed his first physical example of how this concept could be realized.

"When I started working with silk, I knew it held the potential for the large-scale constructions I had been visualizing, but there was no way to really convey the complexity of the idea in a sketch. It would never be able to capture the richness of color or ever-changing nature of the design, when viewed from different angles. I was going to have to actually build one for people to understand my idea," says John.

When touring the gallery space with Marsha again several months before the show, the ceiling height was noted, and while something on this scale had not originally been considered for the event, John felt this was the time to attempt it. Then began a three-month journey to bring the concept to reality.

In order to work with the show theme, the piece had to be based on a human figure, but also needed to be abstract enough in form that it would not require a huge leap of the imagination for viewers to understand how a creation made of the same materials could be shaped in other manners. Perhaps a flowing aquatic animal, geometric shape, a continuous twisting ribbon, a cascading spiral, etc.

The first step was sourcing a material that would provide an attractive appearance as a base structure, be strong enough to hold a form for a full 16 feet of length, and also be as light as possible, so as not to put undue strain on its ceiling mounts. 1" wide aluminum strips were found to be the perfect solution. Used in two different depths - thicker for points requiring the most structural support and thinner for maximum lightness and bendability. In a marked difference from John's previous two pieces, the silk-based The Reach from 2012 and paper-based The Rapture from 2010, the structure in the new work was conceived as a full part of the sculptural form, as opposed to primarily being a base support system for overlaid material.

When considering subject matter for the piece, John quickly turned to his fondness for Greek Mythology and quickly settled on the idea of Icarus, the boy who flew too close to the sun. His father Daedalus was a master engineer and built sets of wings for the two of them, allowing them to fly. He carefully cautioned his son not to fly too near the sun, as the feathers in the wings were held on with wax. Icarus, thrilled with the feeling of flight and becoming overconfident soared too far above his father, causing the wings to melt and him to plummet into the sea where he perished. It's a cautionary tale warning against the dangers of excessive cockiness, which can so often lead to ruin.

In the artwork, we see Icarus ascending higher, with one wing raised above the other and becoming noticeably hotter. This coloration is also present in the head and upper torso, while the lower extremities, still a safe distance from the sun remain cooler.

Initial sketches were created, with some key conceptual ideas for how the figure would be constructed and points of emphasis mapped out. Some may find the lack of detail in sketches for what would seem to be such a complicated project surprising, but this approach is consistent with John's traditional "controlled chaos" watercolor approach. He draws just enough information to give him a visual framework, and then lets the rest of the piece happen in real time, reacting to the material as he works with it. While some of the details evolved, and the finished piece is certainly more intricate than the sketches, the overall form is quite similar to what was first doodled.

A several week process began of cutting and shaping aluminum, and fastening it together with many, many stainless steel screws. The main form and torso of the figure is created from a spiraling helix shape (think DNA strand, or the inside of certain seashells) and numerous strips are twisted in places to provide enhanced appearance/light refraction, as well as needed stiffening and strengthening to reduce sag and flex.

The next phase was silk painting, which spanned many weeks, with large sections of fabric completed based on general ideas of what sort of details and coloration was needed for various areas of the sculpture. All the painting was captured on video on will be added to John's YouTube Channel in time-lapse format soon.

Once the material was steam-set for permanence and brilliance of color, the challenging step of choosing which painted areas would be most effective, cutting the fabric into shapes that would continue the dynamic flow of the sculptural aluminum, while filling out the figurative shape, and finally sewing and attaching the pieces began. In another evolution of approach from The Reach, wire was sewn into the edges of all fabric as it was being hemmed. Though this slowed down the sewing process and posed its own set of challenges, it gave the fabric the ability to be shaped and supported independent of the metal structure, so the two different materials could sometimes join and sometimes dance together from a distance. One of the main benefits of this was that more of the intricately twisted aluminum could remain visible as a great contrast to the colorful silk. The wings in particular have metal mainly at the top edges, with the rest of the fabric shaped by internal wire, giving them an extremely light, flowing and airy appearance.  The top of the sculpture has relatively little silk in relation to other parts. This is by design to allow as much light as possible to flow through to the underside, which is the area most seen by viewers as the piece hangs from the ceiling.

With a completed size of 13' x 16', Icarus Ascends is also light enough to be carried by one person, making this sort of artistic construction suitable for numerous applications and installation locations. The finished sculpture is suspended from the Art Center ceiling by thin steel cables and tilts slightly upward to emphasize how the boy is rising in the air.

The creation of Icarus has been a fascinating journey for John and he is planing future uses of this unique combination of materials in various sizes and creative forms.
Posted by The Figure As Vehicle at 4:32 PM No comments: