FOR IMMEDIATE RELEASE
John Carollo • Marsha De Broske Present The Figure As Vehicle
Dancing Crane Art Gallery • Bradenton, FL • March 2 - April 28, 2011
JANUARY 21, 2012 - BRADENTON, FL - Orlando artists John Carollo and Marsha De Broske will present their collaborative show of figurative artwork at the Dancing Crane Gallery in Bradenton, FL. The show will run from March 2 - April 28, 2012 and feature opening receptions on March 2 and April 6 during the First Friday events in the Village of the Arts. Additionally, the artists will be in the gallery presenting demonstrations of their techniques and answering questions from guests on the Saturdays, March 3 and April 7. 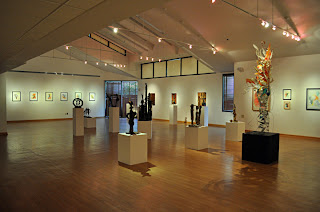 The Figure has been drawn, painted, sculpted, carved, photographed and videotaped. It has been depicted from cave drawings to the present, used as a focal point of contemplation from ancient sculpture through Renaissance sensuality, to modern abstraction. Meaning, emotional connection and invitations for thought, connection and understanding are often reflected through its shape, positioning or setting.

Our figures move beyond form to become vehicles for conveying messages to the viewer. They can be a voyage between worlds or time - gestural and stately, relaxed or straining with tension. Though we work in different mediums, a binding through line we share is the invitation each of our pieces offers the viewer to find a personal connection and interpretation with our work. Visitors are invited to contemplate moods of Jubilation, Inspiration, Transformation and Contemplation as they move through four distinct viewing areas, displayed throughout the entire gallery. An additional space features smallers works and a variety of gift items created by the artists.

John Carollo is a noted abstract watercolor artist, working in 2D with paintings ranging from small size to very large scale, as well as 3D with unusual watercolor, painted silk and mixed media installations, a new one of which will be spotlighted in this show. Working in an expressive style he calls “Controlled Chaos,” his work has been featured in The Albin Polasek Museum,  the City of Orlando Stage Gallery, and numerous galleries and venues in Florida and Georgia. He is a 2012 and 2007 United Arts of Central Florida grant recipient, aiding the continuing development of his work and the presentation of The Figure As Vehicle exhibition. Learn more about John at www.NakedEyeStudios.com.


Marsha De Broske is an accomplished sculptor working primarily in bronze, whose work has been recognized and selected for display in numerous galleries and public art venues, such as the Museum of Florida Art, the Kissimmee Sculpture Experience and the Grand Bohemian Gallery. She received United Arts of Central Florida grants in 2004 and 2007 and has work in the permanent collection of the Crealde Sculpture Garden in Winter Park. Learn more about Marsha at www.MarshaDeBroske.com.

The Dancing Grane Gallery is located in the unique artists’ colony Village of the Arts at 1019 10th Avenue West, Bradenton, Florida, 34205. Situated near Downtown Bradenton, Art Center Manatee, South Florida Museum and the Bishop Planetarium, the gallery showcases unusual artwork in its multi-room interior and large garden. The entire space will be utilized for The Figure As Vehicle. Learn more at www.dancing-crane.com • 941.744.1333

The Figure As Vehicle and artwork of John Carollo is supported by a grant from the United Arts of Central Florida.

Posted by The Figure As Vehicle at 9:00 PM